Kia Ora, This is our second year of running this heritage potato collection trial with the aim of nourishing them so well they grow out of having viruses, and small crops etc etc. This is the alternative we see (based on the principles of epigenetics), to tissue culturing them to remove viruses, as most others are doing. I do not see tissue culturing as a long term solution (reducing genetic diversity and removing plants from the process of co evolution) or even a short term solution for ordinary gardeners, because of cost.

Our New Zealand heritage potato collection has been endangered in recent years by a lack of effective rogueing and selection and the recent arrival of the psyllid and so we are endeavouring to strengthen them again back to having heavy crops as they used to do years ago. We made a lot of progress last season, through heavy rogueing, selection and super nourishment, and were very happy with the results. To see last season’s report and the growout trial process click here. To view our collection available for sponsorship click here.

This year has been totally different to last season, which was cool and wet. This year began very cold, our potatoes were frosted three times in late November, and they didn’t like that. Next season we’ll be prepared with frost cloth at the ready. Then it became super hot, heat wave material and they don’t like that either!. There were way less virus infected plants obvious than last year, however the first the frost then the heat and the early psyllids that came with the heat took a huge toll on the plants. All season their tops grew weakly and never reached half of last seasons bulk above ground.

I was very very nervous about what I would find in the actual trial potato collection. I was concerned we might have lost many of the cultivars in our collection..

It was great though to see how they recovered to a large degree with the application of Biopesticide, and irrigation

It was extremely gratifying to help dig them and see the results! All cultivars had a huge number of tubers. They were small but mostly not marbles. They all looked very healthy, and some of our new cultivars this season did very well indeed. We decided not to weigh each potato crop this year because it was obvious they were very affected by the bad season and it takes a lot of time to weight them. Instead we filled in our chart with comments about each cultivar.

Once again we selected only the tubers from the best plants of each cultivar for our next years seed.

Next season we’ll be better prepared for all eventualities and weigh them when they are harvested again.

The outstanding Potatoes in my mind were:

The most exciting thing this season is that the seeds we grew from last year’s aerial seeds look incredible. They germinated very well, every seed grew, and they looked very healthy. The leaves looked far stronger than those of the potatoes in our Trial. Mark Christiensen also grew a load of seedlings to trial for us and his also look very interesting.

I’ve always wanted to find a potato that is red all through and we grew several of those from the aerial seeds this season. 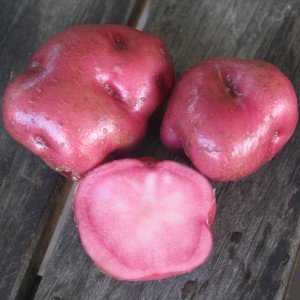 It seems as though most of our potatoes have three main sorts of ancestors, the blue ones, the red ones and the white ones. We didn’t get any very yellow ones from the aerial seed trial which I was surprised about…. Did any of you? (We sent seed out to all of the people who sponsored last years potato trial).

We’ve selected the plants that looked the strongest and grew the biggest crops of interesting looking potatoes to plant again next season amongst our potato trial, as Bill Mollison recommends doing as he saw the Peruvians doing.. they selected the best from the wild potatoes.

On his visits to Peru to learn about potato production and potatoes in general (Bill is a potato fanatic.. years ago when he stayed with us I realised the extent of his love affair with potatoes when I saw what he actually eats.. mainly meat and potatoes!, but also partial to eel…), Bill noticed that when the farmers go up the mountains to take care of their potatoes, they not only take care of those they have planted, they also take special notice of the wild ones that grow all around their gardens. When they see particularly healthy looking wild potato plants, they mark them, and harvest those later when they are ready. https://knowledge.koanga.org.nz/knowledgebase/potato-research-project-introduction/potato-trial-results-2012-2013/They then choose the healthiest wild plants that had the best crops of potatoes, and keep some of those each year to plant in with their cultivated potatoes the following year.

Some of these unusual potatoes will be available this season. We will also have available a limited amount of seed potatoes from the trial. Last year some of our members who grew these potatoes sent in pictures showing us their amazing results

Thanks heaps to all of our sponsors! We can only do this kind of work with your support.