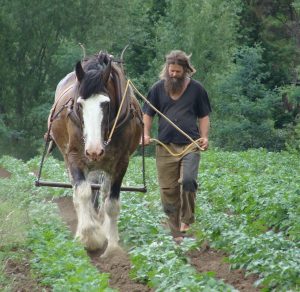 Joseph and Catherine Land and family have been growing potatoes on their land in the Hokianga for about 30 years, and for the past 6 years have been the main potato grower for the Koanga Institute. Growing fantastic potatoes for seed and for eating requires considerable skill and effort. I visited the Lands in early December to discuss how they manage to grow such large quantities of great seed potatoes and to keep their lines of seed so healthy in such a humid climate.

The Lands live in a sheltered river valley. Their main growing land is on the river flats and has a rich, alluvial loam. The potatoes are grown in long rows in a large block with cultivation done using their Clydesdale horses (see pictures). Crop rotation is very important to maintain the health of the soil and the plants. The land to be planted with potatoes will have had a crop of lupins sown in the Autumn 2 years previously. 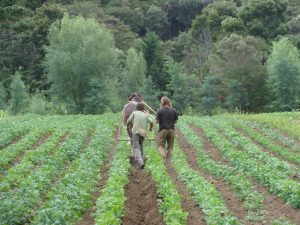 The lupins are harvested for their seed and the stalks left on the ground. The ground is then left fallow and lightly grazed with stock over the next 2 years until it is prepared for the potato planting. Prior to the lupins the land will have grown kumara, pumpkins and sweetcorn, and before that maize. Joseph has found that the potatoes do best in fresh ground, so they go in after the fallow time. The land has no other inputs (other than the lupins and the manure contributions deposited by the stock) apart from an application of lime over the whole cultivated area about 10 years ago. Another lime application is being planned at present. 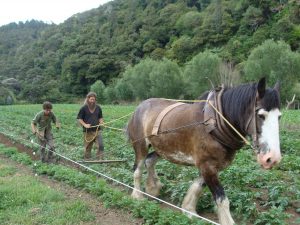 On the day I visited they had just used the scarifier to weed between the rows, and then the furrower to earth up the rows. It was fascinating to watch their enormous Clydesdale, Major, walk between the rows with just enough space to place his feet without damaging the potatoes.

Selection is of great importance in maintaining health, and in improving yields and the quality of the crop. As the plants are growing, any badly diseased ones with very stunted, disfigured foliage would be pulled out if they were noticed although, when growing potatoes on this scale, individual plants can be difficult to pick out, so the main selecting is done at harvest time.

If pests do appear on any of Josephs crops, his inclination is to wait to see if nature will restore the balance and he is not quick to take action. If he does have to act, then he doesn’t resort to toxic chemicals, but would find an alternative which depending on the situation might be physical removal of the pest species if possible or removal of an infested plant, but prevention is obviously best and having healthy soil and healthy plants is the goal.

The potato tuber moth is a significant pest of potatoes in New Zealand, but Joseph has only had two instances of infestation over his time growing potatoes. As the grubs can enter tubers if they are exposed, then earthing up properly is very important.

Particularly with multi stemmed varieties of potatoes there can be gaps following earthing up with the furrower, so they go along the rows with a hoe and ensure that earth is fully around the stems. This practical action seems to be preventing any problems from this particular pest. Potato psyllid is another concern for potato growers in New Zealand, but Joseph has seen no sign of it in his potatoes.

As each row of potatoes is harvested the crop is laid on the ground in separate piles with all the potatoes from a single plant in a pile. This is really important as selection then happens from the best, disease free plants with the largest crop of the best size spuds. Keeping the crop from each plant separate during selection ensures that good sized potatoes from plants that overall did not have a good crop are not selected for seed.

At harvest time there is also sufficient potato plant foliage left so that any showing signs of disease are not selected for seed potatoes. They make sure that the potatoes are harvested, dried and sorted all in one day so they are not left out overnight. Joseph feels this also helps to prevent damage from pests.

The Lands divide the crop of each variety into five grades of potatoes. In order to maintain the strength of the varieties being grown, only the best potatoes are kept for planting the following year, with the next best being seed for Koanga Institute members.

The remaining 3 grades are eating grades – bigs, littles and damaged (which won’t store well and need to be eaten soon). Interestingly Joseph reckons that when the family do the harvesting there is very little damage compared to when visitors help out!

Joseph has noticed significant differences in quality of the varieties with a few lines being weak with disease problems and poor yields initially. By using the selection and growing system detailed earlier Joseph has had marked improvements in terms of disease resistance and yield within about 3 years.